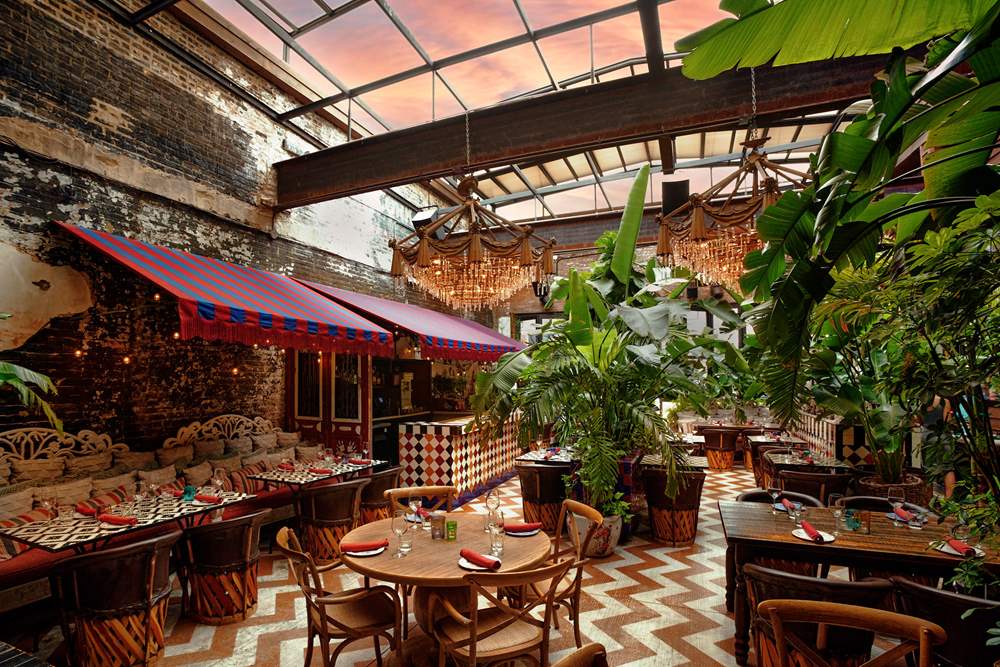 Named after the bohemian freethinkers of the 1950s and ’60s, Beatnik West Town celebrates their spirit and artistic legacy. As a muse and historical touchstone, one beatnik commands our nostalgic reverence: Yves Saint Laurent, a pioneering genius who transformed his era and democratized fashion with timeless and seductive design. At Beatnik West Town we are constantly inspired by YSL and the beatnik generation’s sense of style, aspiration and rebellion to create an exotic escape with progressive, globally inspired food, cocktails and music.

Created by Maison Bonhomme, Beatnik West Town’s aesthetic is driven by a triumphant fusion of three countries close to our heart: Morocco for its audacious combinations of color and passionate artisans, France for its music and artistic confidence, and Italy for a healthy dose of polish and panache to sex it all up.

The contrasting styles and textures of Beatnik West Town feature antique pieces from around the world and more than 400 living plants throughout the 8,000-square-foot, 200-seat space. Expanding on the definition of what a Chicago restaurant should and could look like, our vast collection of exceptional antiques was carefully curated over two years, and when coupled with custom-designed pieces, push the boundaries of maximalist restaurant design in Chicago. Some of the more remarkable pieces in our collection include:

• An enormous, 40-foot-wide by 10-foot-tall, Carved Teak Façade was imported from Bali, where it had been the façade of a grand home, to be a centerpiece of the dining room // circa 1900

• 15 Massive Crystal Chandeliers were salvaged from the Ballroom of the Historic, Yamasaki-designed century Plaza Hotel in Los Angeles and today hang throughout the courtyard and dining room, generously adding history and glamour to the space // 1966

• Monumental 30-foot-wide by 13-foot-tall Pine Cabinets from the Terme di Salsomaggiore were used as both decorative elements and as the principal storage spaces for the bar team // Parma, Italy // circa 1930

• Wrought Iron Wellhead from an Olive Grove in Malaga, Spain owned by an American who worked for the Secretary of State in the early part of the 20th century // 18th century

• Shop Counter from the Oldest General Store in Illinois // Woodstock, IL // circa 1900